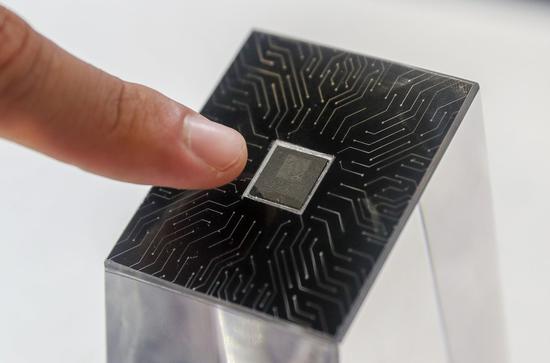 The chip for the BeiDou-3 Navigation Satellite System is seen at the China International Industry Fair in Shanghai, east China, Sept. 15, 2020. (Xinhua/Ding Ting)

According to the China Satellite Navigation Office (CSNO), the service capability of BDS is now first-class in the world.

Along with positioning, navigation and timing services, the BDS system can provide a variety of value-added services like global search and rescue assistance, short message communication, ground- and satellite-based augmentation, as well as precise point positioning.

Based on real-time test results, the BDS's positioning, velocity measurement, timing accuracy, and its service availability and continuity all meet requirements, according to the CSNO.

The special functions of BDS, such as short message communication, have also been put into service, according to the office.

Both the regional and global short message communication services are now open to both the public and users in various fields.

For example, its satellite-based augmentation function is now providing trial services to users with high integrity requirements, such as those in the civil aviation, maritime and railway sectors.

Meanwhile, the high-precision single-point positioning function is being used in such fields as precision agriculture, land survey and automatic driving.

The BDS is now serving the world, operating alongside three other systems: GPS of the United States; Galileo of the European Union; and GLONASS of Russia.

The China-developed chips, modules and other key technologies supporting BDS have made comprehensive breakthroughs and been applied in diversified industries, with performance indexes equivalent to global peers. So far, the key BeiDou-related products have been exported to more than 120 countries and regions.

As well as serving users across a variety of industries, BDS is generating profits in the field of mass consumer products.

Since China's opening of the BDS to global users, major international smartphone manufacturers, including Apple, have widely supported BeiDou. In the fourth quarter of 2020, 79 percent of the smartphones in the Chinese market had applied for network access to support BDS positioning.

In October 2020, China and Russia agreed to increase the compatibility and interoperability of their global satellite navigation systems to better serve the two countries' development, according to a recent report on China's aerospace industry.

The BDS system is becoming ever more deeply integrated into people's lives, making use of progress in chip miniaturization, low power consumption, low cost, radio frequency baseband integration and other technologies, as well as the broad integration of satellite navigation IP cores and mobile communications, said the CSNO.

The BDS continues to generate new application scenarios and models, thanks to Chinese researchers endowing the system with routine and specialized functions.

With the BDS as core, China plans to build a more ubiquitous, integrated and intelligent positioning, navigation and timing system by 2035, and make it a spatial and temporal information service infrastructure.

Most popular in 24h